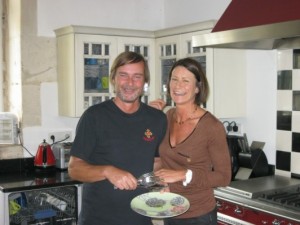 We are Fiona and Eugene Whyms, and before moving to the sunny Charente Maritime permanently, we worked in London in the legal and financial sectors of the oil industry.  We’ve owned property in the Charente Maritime since 2004, and now live permanently at Le Logis, together with our four cats and several free range chickens.  It has been a change of lifestyle we’ve never regretted – we are kept busy managing our gites and the three hecatres of paddocks and gardens on which Le Logis is situated.

Le Logis is situated in the village of Dompierre-sur-Charente, equidistant (20kms) between the Roman market town of Saintes and the world-famous town of Cognac. The earliest record of the property dates from 1471; it was home to seigneurs until the Revolution, and was visited by Henri IV in 1590. The outbuildings that enclose the courtyard produced eau de vie from the surrounding vineyards, which was sold to the nearby Cognac distilleries.   Le Logis was acquired in 2004 from the then French owner by an English couple, who renovated part of the outbuildings to create two gites, as well as installing an outdoor swimming pool and undertaking numerous other repairs and improvements. We acquired the property from them in 2011 and have spent the last three years converting the additional outbuildings on the other side of the courtyard into a leisure centre incorporating an indoor swimming pool, spa area, gym and games room/bar. We also renovated a small outbuilding to create a third courtyard-facing gite for two.  It was a disruptive, messy and at times muddy three year process –for a while our daily view included a full-sized crane which was necessary to lift out 400 tons of reinforced concrete vats that had previously held the eau-de-vie. Apparently the only other way to remove the vats was dynamite, and we didn’t believe that would go down particularly well in the village…   Following completion of the leisure-centre project in summer 2014, we were finally able to realise our dream of re-landscaping the courtyard garden to create a formal box-hedge design in the shape of a fleur-de-lys (with rose and lavender infill) together with a charming pergola that runs the length of the courtyard on one side, and two rows of vines as a nod to our Cognac “patrimoine”!

Click on any image below to display in full size.

Our cats snoozing in the summer heat

The flooded Charente Valley from our gates

The Bac a Chaine at Dompierre

The horses at rest